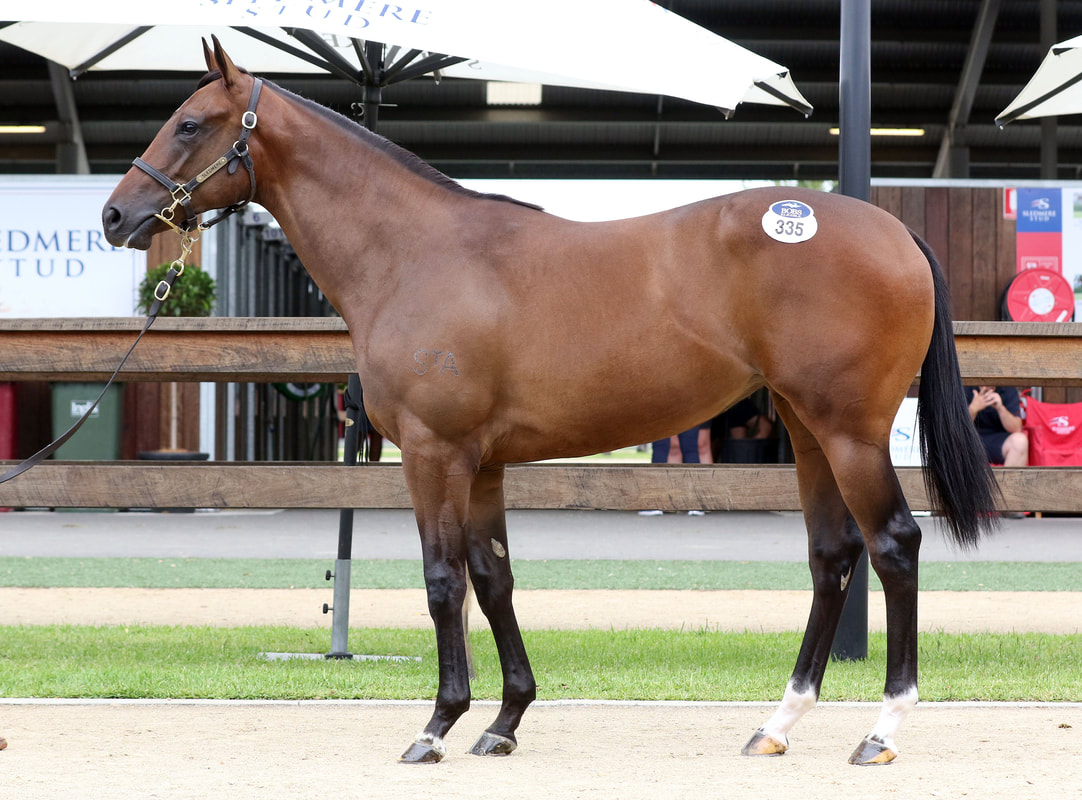 This filly moved beautifully at the sales and was a  real eye catcher when she walked. She is by promising first season sire WINNING RUPERT. She is out of a young mare who was Gr 3 placed at 2, from a 2yo family. This filly looks sharp and early. She heads to the boutique Sunshine Coast stable of multiple Group 1 winning train DAVID VANDYKE.​ 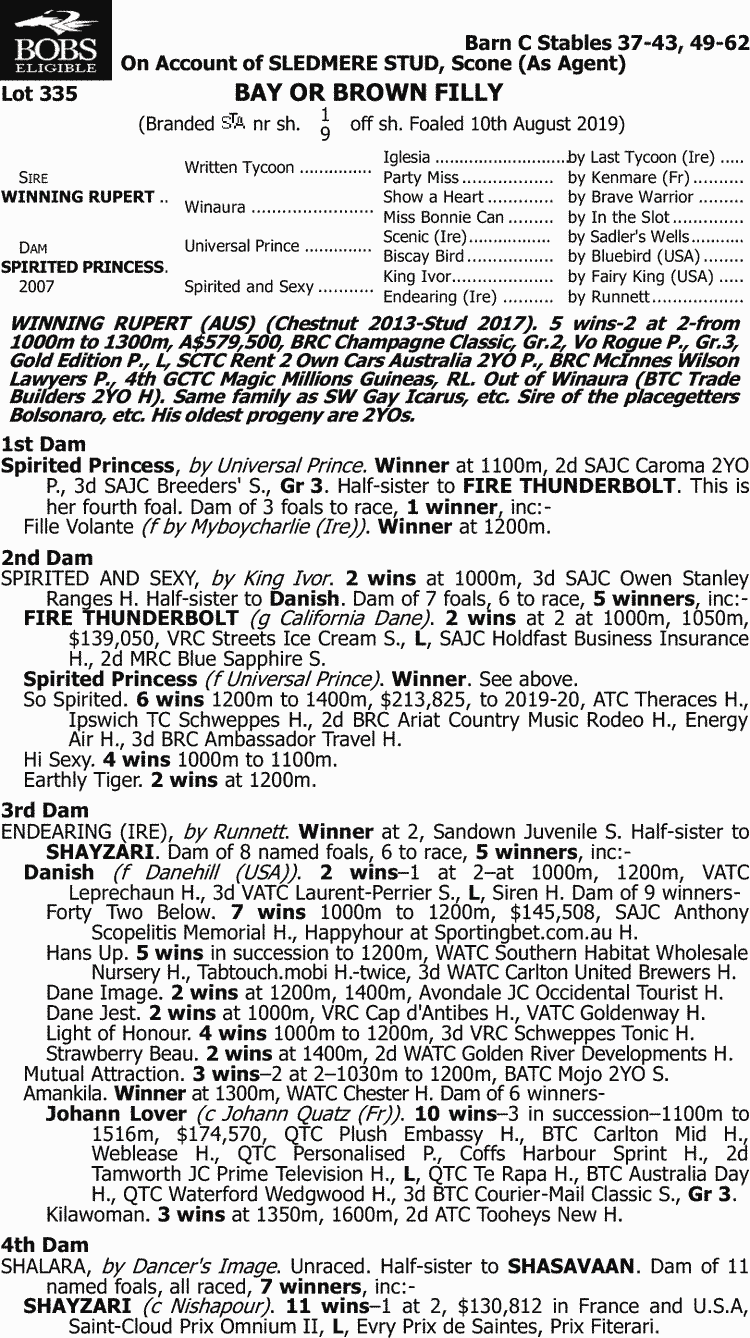 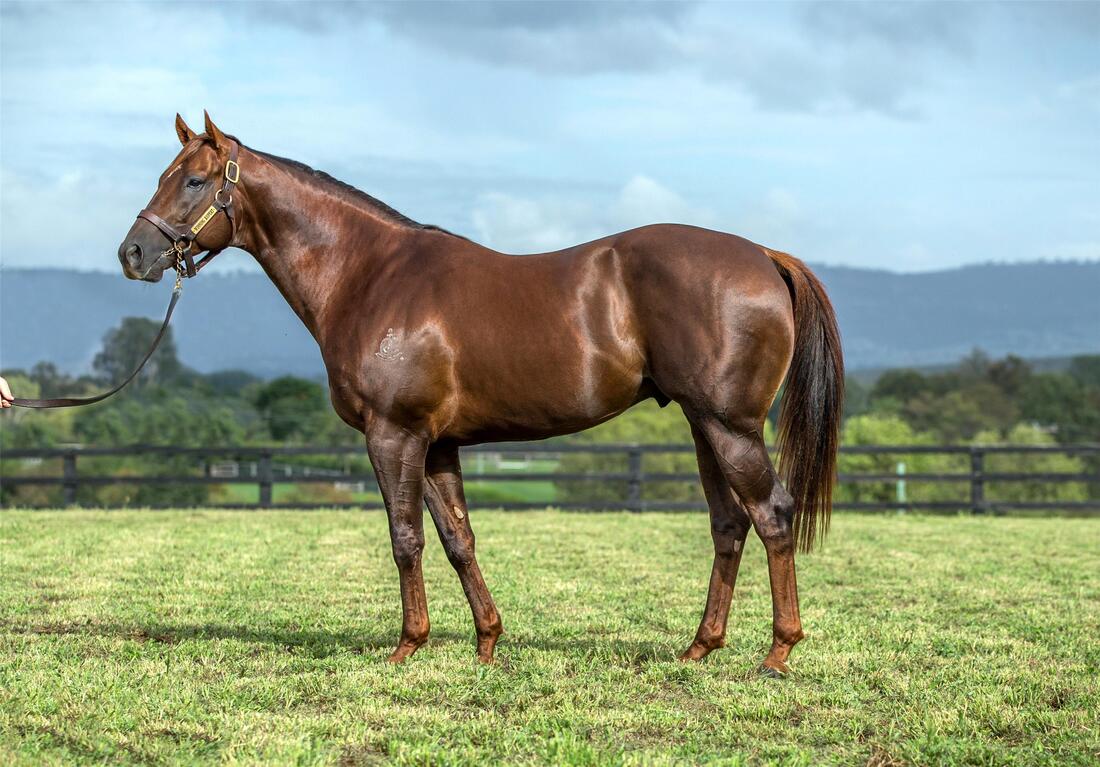 WINNING RUPERT
WINNING RUPERT is a horse I am very familiar with. I very nearly purchased him as a yearling, and went on to buy his half sister the following year.

WINNING RUPERT was one of the fastest horses we have seen in recent years, his career cut short by injury in his prime.

He reminded me an awful lot of GENERAL NEDIYM on both type and pedigree. Neither had fabulous female pedigrees, but both were lightning fast.

WINNING RUPERT showed good ability as a two year-old but wasn’t produced until the Queensland winter when he won at the Sunshine Coast on debut and then the Group 2 Champagne Classic at Doomben.

WINNING RUPERT won his next three starts as a three year-old before being injured as favourite when fourth in the Magic Millions Guineas, and retired to stud with 5 wins from just 6 starts.

At the time of writing he has had 11 starters for two winners and one stakes placegetter.

Fair to say WINNING RUPERT has been to date overshadowed by his Newgate barnmates Capitalist, Fying Artie and Extreme Choice to date. This made buying a second crop Winning Rupert far more affordable.

I feel we will see the best of the Winning Rupert’s as late two year-olds and early three year-olds. 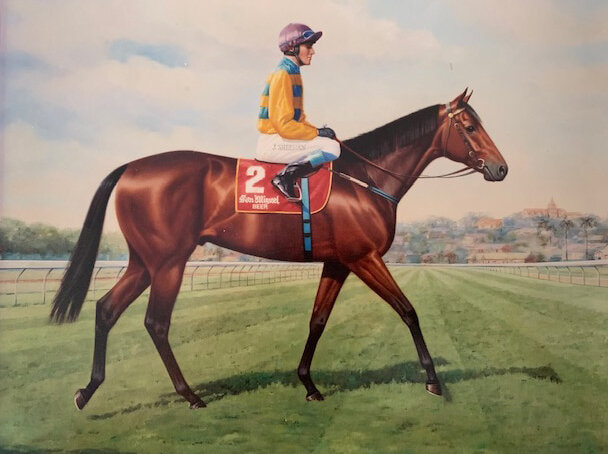 UNIVERSAL PRINCE captured on canvas following his AJC Derby Win
This filly is the fourth foal of the stakes placed 2yo SPIRITED PRINCESS (by Universal Prince by Scenic).

I like the fact she is out of a relatively young mare who was a fast early two year-old who was stakes placed early in her career.

SPIRITED PRINCESS is well managed by her astute owners Royston and Catriona Murphy of Sledmere Stud, Scone. The mare was mated to RUSSIAN REVOLUTION last season.

I loved UNIVERSAL PRINCE as a racehorse. He was prepared at my home track of Kembla Grange by the late Bede Murray.

UNIVERSAL PRINCE was an out and out topline racehorse winning from 1200m as a 2yo through to 2400m as an older horse. He won at Group 1 level on 4 occasions in proper races the AJC Derby, AJC Spring Champion, STC Canterbury Guinea and STC Ranvet Stks.

At stud, I felt UNIVERSAL PRINCE was pretty poorly managed and despite this did a pretty good job from very limited opportunities in NSW and finally in WA.

I suspect this filly is getting a great deal of her physique and appearance from UNIVERSAL PRINCE and more specifically his sire SCENIC.

In particular I like having SCENIC in this filly’s page. SCENIC was an amazing sire and broodmare sire and in particular has been responsible for some high class fillies. As a sire SCENIC produced 13 individual Group 1 winners headed by UNIVERSAL PRINCE, SCENIC SHOT, SCENIC BLAST, BLEVIC, SHAME and Melbourne Cup winner VIEWED.

DAVID VANDYKE prepares a select team of 30 horses ensuring every horse receives his personal attention at his Sunshine Coast stables.

David was an exciting addition to the Queensland training ranks in 2016 after a highly successful career in Sydney.

This came off the back of a phenomenal season including keynote performances by YANKEE ROSE winning the Group 1 ATC Sires Produce Stakes and Group 1 Spring Champion Stakes, and placings in the Group 1 Golden Slipper and Group 1 Cox Plate.

More recently outstanding three year-old ALLIGATOR BLOOD has been a headline grabber for the stable. He was a Group 1 winner of the Australian Guineas and also the Group 3 Caulfield Guineas Prelude and the Listed Gold Edition Plate.

The stable boasts one of the most outstanding winners to runners strike rates and it has an impressive strike rate when reaching black type level.

​A key part of the stables success has been its close association with the current leading jockey in Queensland, RYAN MALONEY.

To receive full information and documentation in relation to this yearling, please complete the following form:
Ontrack Syndicates ABN 66 617 899 760 Authorised Rep No 001275873 of AFSL 223671